The Czech presidential elections have a surprise third-place candidate in the shape of Vladimir Franz, an opera composer with tattoos covering his body.

A competition has been launched to develop a musical instrument that can be played, at orchestral level, with one hand.

Former home of actor and composer Ivor Novello sells for £350,00

The former residence of composer and film actor Ivor Novello has been snapped up for close to its £350,000 asking price – and is to be leased as office space.

Minnesota unfreezes for one night only – Grammy time

The Minnesota Orchestra, whose musicians have been locked out for four months by a brutal management, will give a one-off concert on February 1, ahead of the Grammy awards.

On 22 May 2013, the great composer’s 200th birthday, the Semper opera house in Dresden, where he was music director for seven formative years (1842-49), will be performing…. Verdi.

Although born in the same year, Wagner and Verdi embody two very different outlooks on life and art. 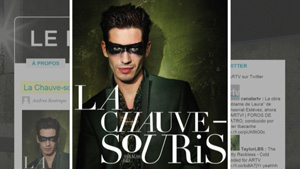