Richard Hallam MBE and Keith Farr are both honoured at Monday’s Schools Prom with Classic FM Music Teacher Of The Year Awards.

Classical figures in Standard’s list of 1,000 most powerful Londoners

London’s Evening Standard has released its list of London’s ‘1,000 most influential people’, with 22 entries under the classical music category, 11 appearing in the list for the first time.

China long ago emerged as a kind of promised land for classical music, and two of America’s great orchestras are wading in with big projects and very different approaches. You could call one the Philadelphia flier and the other the Big Apple plod.

In search of my grandfather: a leading violinist goes looking for a hero

Daniel Hope, the international soloist, wrote a profound piece for Slipped Disc three months ago about his grandmother’s home in Berlin, seized by the Nazis and used by two appalling war criminals, Ribbentrop and Speer.

Garsington Opera has named the conductor Douglas Boyd as artistic director, succeeding the excellent Anthony Whitworth-Jones, who has retired.

A Veteran’s Standing Ovation, 70 Years In The Making

When you reach a certain age, big life surprises tend to come few and far between, unless you’re Harold Van Heuvelen.

The opera novice: Indulge yourself in La bohème, the ultimate weepie 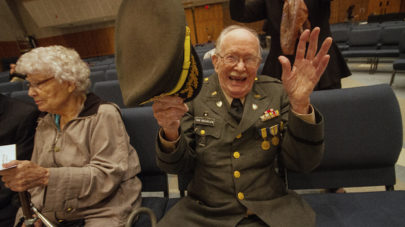