Opera singers need to be sensitive

To paraphrase the great football sage Bill Shankly, for the conductor Nicola Luisotti the music of Giuseppe Verdi isn’t a matter of life and death.

Scottish Chamber Orchestra principal conductor Robin Ticciati is to renew his contract with the orchestra until 2018, it was revealed today as part of the announcement of the orchestra’s 40th anniversary season in 2013-14.

Reports of the Death of Opera Have Been Greatly Exaggerated

Two worthy and penetrating studies of opera take as their premise the idea that the form is dead.

‘Play Me I’m Yours’: The Global Public Piano Project Scatters Keys Across Monterey For All To Play

If you find yourself walking the streets of Monterey, California, and pass by a piano curiously stationed in your path, there’s no need to scratch your head.

BitTorrent goes straight in effort to end association with piracy

ACM (The Academy of Contemporary Music) is to offer all new performance and production students an Accelerated Learning Programme, to enable them to graduate with a degree aged 19. 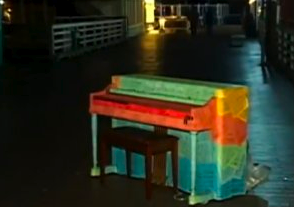