Daniel Hope on the music of the spheres

Classic FM’s Tim Lihoreau chats to violinist Daniel Hope about his new album, Spheres, and even gets his violin out.

Classical conductors spend a lot of time on airplanes flying from one job to the next and are thus used to the frustrations that come with modern-day air travel.

Chandos will record the new partnership

BBC Concert Orchestra is joining forces with five of the Alzheimer’s Society’s regional ‘Singing for the Brain™’ groups in music-making aimed to engage with people dealing with the impact of dementia.

A group of anonymous donors is giving the Charlotte Symphony $2 million. The donors’ contribution could increase if some financial goals are met.

Something new is bubbling up from the depths of the Internet. Music critics are calling it, “Something to do.” 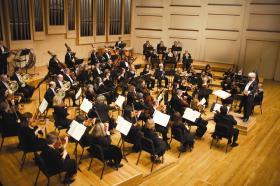