It may not quiet make it The Beggar’s Opera, but Italy’s famed La Scala is to cut the salaries of its top directors, in line with the rest of the country’s straitened economic circumstances.

The independent report, commissioned by the BBC’s director of audio and music, Tim Davie, was written by academic John Myerscough, a former special advisor on the arts to the House of Commons.

A one-page document signed by Polish composer and pianist Frederic Chopin is on the auction block through Wednesday and has proved more popular with bidders than expected.

The L.A. Opera is on challenging ground as local groups like the L.A. Phil., The Industry and Jacaranda stage inventive productions of opera and opera-like music theatre.

Tanglewood Revisits Its Past, for All to Hear

Tanglewood, the summer home of the Boston Symphony Orchestra in Lenox, Mass., is celebrating its 75th anniversary this summer in several big ways.

David Itkin will not extend his contract beyong June 2013.

LPO to perform outside the Royal Academy of Arts

As Nielsen’s unusual and brilliant Third Symphony turns 100, it’s about time we respect his notes as we would Mahler’s.

Kicking off the Olympic cultural festivities in style, The Dude and his Simon Bolivár Orchestra of Venezuela are back in Britain. Dudamel & co are taking over the Royal Festival Hall this weekend

The Simon Bolivar Symphony Orchestra conductor loves London, and London loves him back. 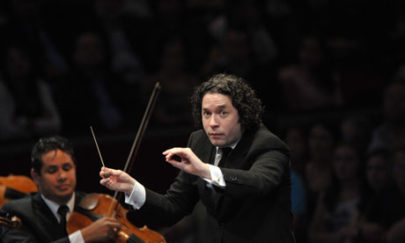