A Franciscan tenor has become the first ever friar to sign a major recording contract, after music executives heard him sing in his native Italy.

Interview: composer Jonathan Dove talks about his new opera, The Walk From the Garden

Jonathan Dove tells how Adam and Eve meets Paradise Lost in his new opera, The Walk From the Garden, premiering at Salisbury Festival.

Dietrich Fischer-Dieskau was a revolutionary performer

Fischer-Dieskau reorientated our listening experience, writes Daniel Barenboim in a personal tribute to the great baritone.

A guide to John Zorn’s music

Anything and everything goes in Zorn’s constantly evolving musical world: his pieces are a vision of what happens when postmodern practices become something much more meaningful.

José Ángel Salazar, part of the country’s successful El Sistema music programme, is not old enough to earn a wage.

Opera News, 76 years old and one of the leading classical music magazines in the country, said on Monday that it would stop reviewing the Metropolitan Opera, a policy prompted by the Met’s dissatisfaction over negative critiques.

Composer Carl Davis and the Los Angeles Chamber Orchestra take on the music of silent films at a Royce Hall event on Sunday night.

Nikolay Khozyainov has been named the ninth winner of the Dublin International Piano Competition. The 19-year-old Russian receives €15,000. 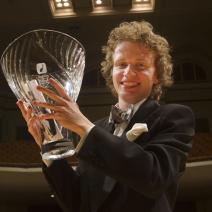