Prospective buyers are eyeing chunks of EMI’s recording operations – including its classical divisions – for the third time in five years after US and European regulators cleared the $1.9bn (£1.2bn) sale of the bulk of the British company to Universal Music Group.

BEIJING (AP) — A stage performance by bikini-clad women wearing headpieces styled after traditional Peking Opera has sparked debate in China after photos were made public this week, highlighting divided views on how to preserve the country’s traditions.

Klaus Heymann: On 25 Years Of Naxos — And Changing The Classical Music Business

Twenty-five years ago, no one — and I mean no one — would have predicted that a little budget label out of Hong Kong would totally upend the classical music industry.

Five months ago, Annemarie Kremer was lying in an Austrian hospital bed wondering whether she would ever mount a stage again.

The US-born conductor John Axelrod has just brought out a book in German on the state of orchestral culture. It’s a brave book, and a timely one.

When the Mountain Changed its Clothing, Bochum Jahrhunderthalle 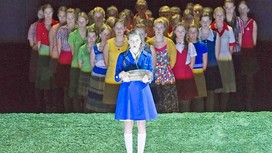