Young French conductor receives £15,000 and a one-year assistant conductor position with the LSO

Welsh singer Bryn Terfel will perform with the Melbourne Symphony Orchestra next year as part of a gala concert.

The Master of the Queen’s Music, Sir Peter Maxwell Davies, has disclosed details of his new work, which is a reaction to the “jingoistic” tone of the Olympic Games.

Classical Music is partnering with US education company Artistworks for the launch of the Artistworks Classical Campus, and the magazine’s deputy editor, Kimon Daltas, will be hosting an online debate on classical music education and technology this evening at 9pm UK time.

There is to be a year-long festival of contemporary music at London’s Southbank Centre, but will the public go?

The Case for Wagner in Israel

It was only a matter of time: Richard Wagner, the most volcanically controversial figure in the history of music, has inserted himself into the 2012 Presidential election.

The Minnesota Orchestra has cancelled all its concerts through Thanksgiving, after management locked out musicians as their contract expired and the two sides could not agree on a new one.

Ulrike Dederer viola wins in a first for Cremona competition 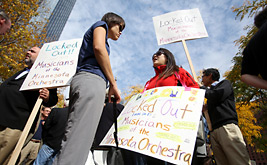