Met Opera To Broadcast ‘Ring’ Cycle In Movie Theaters In May

The Metropolitan Opera has announced that concurrent with its final live presentation of the Robert Lepage production of Wagner’s “Ring des Nibelungen” this spring (May 5-12), it will begin broadcasting the complete “Ring” cycle to movie theaters around the world.

LA Phil Concerts With Dudamel, Salonen, Others Will Air On KUSC

A new series of broadcasts featuring the Los Angeles Philharmonic in concert will be heard on classical music station KUSC-FM (91.5) beginning this weekend.

Wanted: 2,500 Bach lovers, each with 20 quid to spare. Previous experience of philanthropy not essential.

Glyndebourne Opera Is A Head In The Race

The new Glyndeboure opera, Gold Run, conducted by James Redwood, is about the Paralympic Games.

A Rap From The Podium

Few Conductors Speak Directly To Their Audiences, But When They Do Is It Informative And Engaging Or Downright Annoying?

We Should Celebrate Debussy By Assessing His Real Legacy

In this anniversary year, forget the concept of Debussy the musical impressionist. I want to celebrate Debussy the sonic explorer.

The Rest Is Noise

In a Rest Is Noise exclusive, Alex Ross reveals to an anxiously waiting world the contents of the smoothie that Michael Tilson Thomas prepared onstage at Carnegie Hall the other night, during a rendition of Song Books and other works by John Cage. 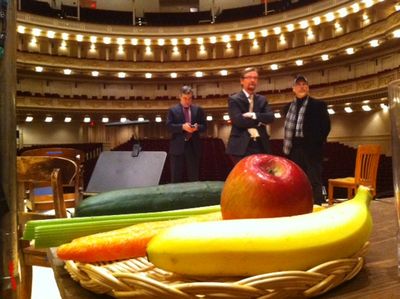