31st October: Charity Choral Music, Protests at the Philharmonic, and Domingo and the Donkey

A new disc of choral music for Remembrance Day – hear an excerpt!

Just in: Arts Council England to cut one in five jobs

The long awaited axe has fallen. ACE will reduce its staff from 559.5 to 442 and halve its executive director team from eight to four.

Brilliant Classics, a Dutch reissue label that specialises in low-priced mega-editions, has been bought out by Hamburg Edel AG, an entertainment group which owns Face Down Records, Gang Go Music, Club Tools and Control Records.

Wherever the Israel Philharmonic Orchestra goes, protests seem to follow.

Perhaps no other composer’s music has been dressed up (and down) in a wider variety of outfits than Johann Sebastian Bach’s.

The Northerner Blog, The Guardian

Northern musicians join colleagues from Iceland in new score for of the tragic story of a beguiling but self-destructive young woman, one of the silent movie classics of Germany’s Weimar republic

The Donkey that outsang Domingo: How Pollyanne was saved from the salami factory to star at the Royal Opera House

Just a few weeks earlier, I’d known next to nothing about opera. Now I could drive to the Royal Opera House almost with my eyes shut and get a friendly cry of ‘hello’ from the greatest tenor in the world, Placido Domingo, when I strolled backstage, humming my favourite arias from the latest show. 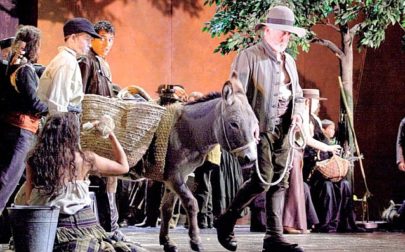