BBC to broadcast Last Night of the Proms in 3D

A ‘summer of 3D’ will include the The Last Night of the Proms, Planet Dinosaurs and Wimbledon, the BBC has revealed.

Do concert pianists need Olympian level of fitness to cope with the strains of performance? Science is using Melvyn Tan to find out.

Who stole the teeth of Brahms and Strauss?

In a story that sounds ripped from an underwhelming, dental-centric thriller, Austrian officials are pursuing leads in an investigation of who broke into the graves of 19th century composers Johan Strauss Jr. and Johannes Brahms and stole their teeth.

First verse written for solo voice rather than full chorus.

Lang Lang gears up for the Latitude Festival

The pianist talks to Gramophone about his debut at the multi-arts event. 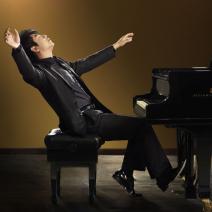