Tamsin Little on Delius: regrets of a lost composer

Violinist Tamsin Little tells Ivan Hewett why she loves the music of Delius.

If you were ever in doubt that opera could be hilarious then Puccini’s one-act opera Gianni Schicchi will convince you.

Evelyn Lear, an American soprano who became a star in Europe in the 1950s and later won acclaim in the United States for singing some of the most difficult roles in contemporary opera, died on Sunday.

If you missed a rare interview with Vangelis in the sports pages of the Observer, you’ll want to catch up on the Greek composer’s thoughts on economic crisis and its relation to creative impotence.

The Trouble with Sponsorship

More people these days are making their feelings known about where sport and the arts get their necessary lucre. And it’s not a moment too soon. But where do we go from here? 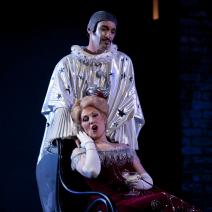