Since its opening night on Friday the 8th of June, Opera Holland Park’s ‘Cosi Fan Tutte’ has welcomed outstanding reviews, in particular for the acclaimed Thomas Kemp who ‘makes an exceptional debut as an opera conductor and coaxes a ravishing blend of colours and expression from the supple, responsive City of London Sinfonia’ (classicalsource.com). ‘The Times’ notes Thomas’s conducting style as he ‘gives the singers sensitive support, while keeping the score and the action racing ahead to its dark and uneasy conclusion’, whilst his support is also duly noted by ‘The Evening Standard’: ‘under Thomas Kemp, the City of London Sinfonia’s wind section proves attractively pungent’ . The ‘captivating performance’ of the opening night is sure to bring in the crowds, drawn in by Opera Holland Park’s ‘electric’ atmosphere (The Upcoming).

Also starring in the run of the Mozart opera is Tenor Andrew Staples whose ‘stylish vocal performance’ (classicalsource.com) has been praised by a breadth of reviews. ‘The mellifluous and fresh tenor of Andrew Staples as Ferrando’ (The Times) and ‘Andrew Staples’ swellingly ardent Ferrando’ (The Evening Standard) attracted attention from an abundance of critics. Ferrando’s integral importance to the plot is emphasised by Andrew’s successful performance as his portrayal of ‘part comic rogue…, part victim…’ is ‘tinted and enriched by [a] patina of psychological duality’ – an intelligence which lends itself to an effective interpretation of Ferrando (classicalsource.com).

Tickets are still available for the remaining performances here. 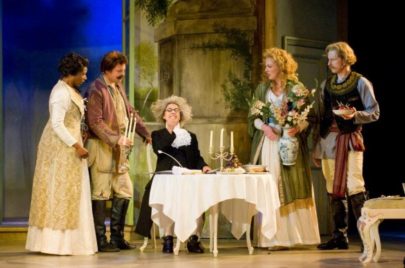