The ECHO (European Concert Hall Organisation) has awarded its Rising Star Award to the stunning Spanish violinist Leticia Moreno, for her exuberant talent and tantalising stage presence. The impressive violinist was a protégée of the late Mstislav Rostropovich, who praised her as ‘a passionate musician who pours heart and soul into every single note. A violinist of enormous energy and talent’. She has also performed with some of the most celebrated orchestras across Europe so far, from the Mozarteum Orchestra, the National Philharmonic of Russia to the Orquesta Nacional de España.

This is by no means her first award; she has previously won international competitions such as Concertino Praga, Sarasate and Kreisler. However, the prestigious ECHO award enables her to play for new audiences in some of Europe’s most renowned concert venues; an opportunity to wow them with her virtuosity, stunning technique, and on-stage personality.

Watch many of Leticia’s performances here.

Her next live performance is at the Rheingau Musik Festival on the 18th of July, tickets are available here. 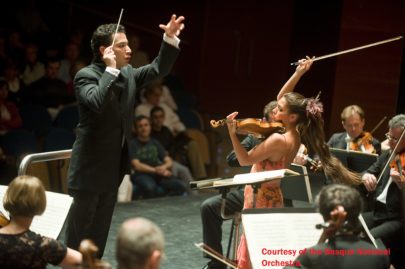