Classical Music and the Olympic Games

Nineteen members of the Canadian Olympic team have this week been revealed to be classical musicians, members of Conservatoires back in Canada but are, this month, just focusing on the sporting side of their talents.

There was no nod to popular music in the selection of Olympic flag bearers of 2012 but it was conductor Daniel Barenboim, who proudly stood as one of the eight great humanitarians, chosen for his services to music and peacekeeping. This was most notably due to his creation of the West-Eastern Divan Orchestra, bringing together young musicians in his home country of Israel regardless of their political position or origin either side of the Palestine/Israel border.

During a celebration of ‘England’s green and pleasant lands’, Parry’s Jerusalem was touchingly sung by 11-year-old Humphrey Keeper, leading The Dockhead Choir. Handel’s Water Music and Elgar’s Nimrod both featured at the dramatic moments of the event, whilst Ode to Joy was a debated contender for the show’s repertoire after David Beckham performed it in a Samsung advert using just his feet, talent and a football; however it never made the bill.

Speaking of Ode to Joy, this week Barenboim proclaimed Beethoven to be a ‘bit of an Olympian’ himself after conducting his medal worthy First to Ninth Symphonies all in eight days at the BBC proms. After the performance of the Ninth last Friday Barenboim was then rushed (most certainly using those Olympic traffic lanes!) to get to the Olympic stadium to carry the all-important flag.

Classical music was also given the chance to show its modern face and its sense of humour, with Sir Simon Rattle conducting whilst Mr. Bean was on the keyboard, contributing to the famous Vangelis music from Chariots of Fire. Whilst Rattle’s role was small, it featured a wonderful combination of classical music from the London Symphony Orchestra with Bean’s electronic input – probably the most crucial part of Vangelis’ wonderful theme tune. And so a famous Maestro and Britain’s famous comedian shared the stage. With even the Queen herself showing a sense of humour in her James Bond sketch, it was great to see Sir Simon Rattle dispersing stereotypes of stuffiness within classical music courtesy of his witty performance with Mr. Bean.

Classical music and its musicians actually feature in the most important moment for every single Olympian out there.  This year the London Philharmonic Orchestra recorded all 205 Olympic countries’ anthems in the legendary Abbey Road Studios with just 12 minutes allocated to record each individual piece. Despite the tight schedule that the anthems were completed in, they sound fantastic and boost every nation’s spirits each time a Gold is won. We just hope to hear ‘God Save the Queen’ a lot more over the next week… 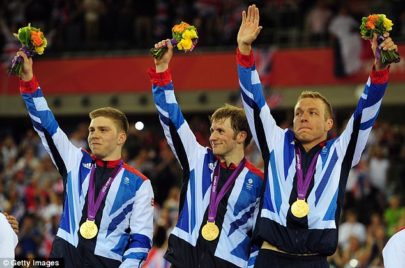