Award-winning violinist Daniel Hope’s album, Spheres, has reached the top of the Classical charts. The album showcases a range of new works and arrangements from masters such as Karl Jenkins, Max Richter, Gabriel Prokofiev, and others. Spheres revolves around the theory of “musica universalis” – the idea, initiated by Pythagoras, that planetary movement creates its own kind of music. With pieces ranging from the Baroque to the 21st Century, Spheres allows Daniel to display his skill and versatility in a unique and awe-inspiring performance. Daniel recently performed at both the BBC Proms and the Bristol Proms.

Spheres is one of two of Daniel’s albums in the Classical charts top ten; his recomposition of Vivaldi’s Four Seasons by Max Richter is currently at number seven.

Daniel recently appeared on BBC Breakfast – you can see the interview here: http://www.bbc.co.uk/programmes/p01dgflp 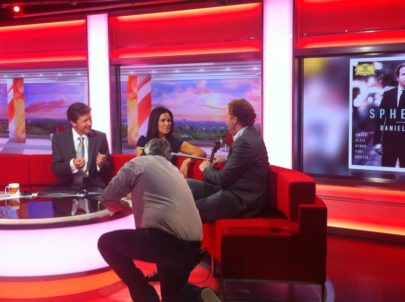 Daniel Hope getting ready for his appearance on BBC Breakfast