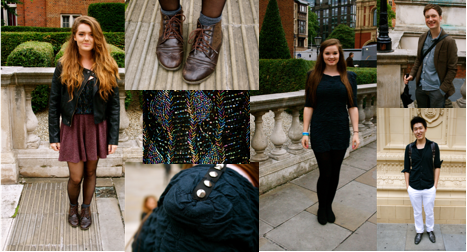 This week at the Proms we talked to many young Prommers about their thoughts on the link between fashion and classical music. Many of them were attending the Proms for the first time, so had really thought about what to wear to the Royal Albert Hall.

We really enjoyed talking to 17-year-old twins, Shannon and Jo, who visited Prom 32 to see their sister perform Bernstein’s Mass. They normally attend pop or rock music concerts but admitted that the change in musical styles for them that evening meant that they dressed smarter than usual. As both girls are interested in fashion, they said they would be looking out for what the performers were wearing, and hoped it wouldn’t be distracting or inappropriate.

Two musicians, Justin and Joe, had contrasting views on the fashion of performers and the audience. As Joe doesn’t care about the audience’s style when he is on stage, he tends to wear exactly what he likes to a concert. On the other hand, Justin really considered the details of the repertoire when choosing his outfit for the Proms. As he had performed the piece of music before, he thought about the meaning of it and how he could express that himself as a spectator in the Royal Albert Hall.

Read more about the Prommers’ opinions, with many more photos and stories, on our Fashion at the Proms Pinterest Board.