The music industry can be a competitive and intimidating place. Young people often wonder how it is ever possible for certain professionals within the music industry to get to where they are now. To show you that it IS possible, the WildKat team thought it would be inspiring and extremely helpful to ask the professionals themselves!

‘Industry Idols’ will be an ongoing series as we interview various key members of the music industry every week to find out how they started their careers in the industry, and what they’ve learnt along the way.

Today, we bring you the first instalment of many; an interview with the Royal Opera House Chief Executive, Tony Hall. 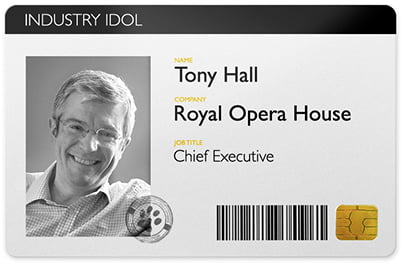 What are the first, most important steps a young artist needs to take when they embark on their career as a performer?
The same as in any career really – to listen, watch and to learn as much as possible from those around you, and to make sure you make the most of every opportunity.

What was your first job in the music industry?
I started at the BBC as a trainee straight after University and worked my way up, ultimately becoming Chief Executive BBC News. I also launched Radio 5 Live, Britain’s first 24-hour News and Sport Radio channel, BBC News 24, BBC News Online and BBC Parliament. I left in 2001 to come to the Royal Opera House.
So, in fact my first job in the music industry wasn’t until I was 50, which is a bit unusual.

What skills do you think are needed to succeed in the music industry?
To be successful in any career I think you need hard work, dedication, attention to detail, good management skills, leadership and vision. In the music/performing arts industry particularly in the subsidised sector, you have the constant juggling of different stakeholders, a complex and finely balanced business model, limited resources demanding the most creative minds to ensure every penny is used to the maximum and a commitment to putting the art and the development of the art forms first.

What’s the most important thing you’ve learnt during your career?
Listen to those around you, have the courage of your convictions, employ a can-do attitude and have the grace to say thank you.

What do you enjoy most about your job?
I’m fortunate to work in one of the most creative and inspiring organisations in the world. It’s not hard to be passionate about what you do when you are surrounded by excellence in every area, not just the singers or dancers who are on stage every night, but those working in the prop workshop, scenic artists, wigmakers, costume makers … the list goes on. And seeing all that goes on behind the scenes, let alone what goes on stage always thrills me – everyone has their part to play and that sense of team work that is endemic in the Royal Opera House and the sense that everyone has a vital part of play is what really excites me.
Another thing I get very excited about is our increasing ability to share our work with a much wider audience. This has been made possible through the tremendous changes in technology over the last decade or two. I was excited by the challenges and new opportunities with digital whilst I was at the BBC and it’s been wonderful to see the Royal Opera House change and develop since it reopened in 1999 and now be in the position to showcase its work on high definition tv, in cinemas, on DVDs and online throughout the world reaching many more hundreds of thousands of people.

On a typical working day, what’s the first thing you do when you get into the office?
Check through the emails, have a moment to catch up with my PA to look at the day’s diary, coffee then straight into whatever is ahead!

Do you think there is anything in the classical music industry that needs to be changed? If yes, why?
Probably the biggest change in the last few years is the way in which audiences purchase music which has impacted the recording and distribution companies hugely, ourselves included as Opus Arte which is a wholly owned subsidiary of the Royal Opera House, recording and distributing operas and ballets both on DVD and selling them into cinemas. We all need to embrace new technologies, be ready to change the ways in which we work and be one step ahead, for example we’ve just filmed our first opera in 3D – Bizet’s Carmen – in a partnership with RealD, the leading 3D technology company.
It’s vital that we all think outside the box, create fruitful partnerships with other companies, share costs, be innovative and introduce new audiences to our work.

Are there any young musicians, emerging venues, exciting companies, composers… etc that you are keeping your eye on?
Where would I start?!!! The UK is experiencing the most wonderful time artistically, despite the economic pressures, and is regarded as a world beater in terms of the creativity and talent in our concert halls, on our stages, in our cinemas, in galleries and museums. We’ve got such a tremendous opportunity particularly with 2012 when the world’s eyes will be upon us to really showcase this – everything from the big national companies to small community activities up and down the country. We’ve got to make sure that people know about the breadth of what is available to them and how they can get involved.

Where do you read about classical music?
I bought myself an iPad just before the summer holidays and have to say it’s absolutely wonderful for everything – reading about arts and culture, news, listening to my favourite music, checking the weather forecast … I don’t leave home without it!

Where is your favourite place in the world for classical music?
Well, obviously I’m most often at Covent Garden and I never fail to be inspired by a live performance. But I also enjoy going to other venues when time allows, and one of the most wonderful places I’ve been to is the open air Alhambra Theatre in Granada where The Royal Ballet have performed. It’s just magical … a beautiful night sky … Tchaikovsky’s magnificent score and the dancers in their classical white tutus. Magic.