Following a wonderful recital at London’s National Geographic store yesterday, Katherine Bryan is thrilled to announce to release of her second album today. The rising flautist performs concertos by American composer Christopher Rouse and French composer Jacques Ibert, demonstrating her versatility as a artist as well as her virtuosic and astounding technical style. The disc also features Debussy’s Syrinx and Frank Martin’s Ballade.

Katherine is Principal Flute and currently a musician in residence with Royal Scottish National Orchestra, under the baton of Jac van Steen, who she performs with on the CD.

Katherine Bryan plays Flute Concertos by Christopher Rouse and Jacques Ibert can be purchased from iTunes and Amazon.

Keep up to date with news from Katherine through her Facebook, Twitter and regular posts of the WildKat PR blog. 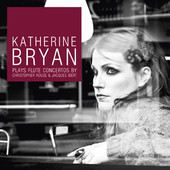