Accentus Music are pleased to announce to today the release date for the DVD and Blu-Ray of Mahler’s 4th Symphony in the United States of America.

The production label continues its Mahler Cycle, following the success of Mahler Symphonies No. 2 and 8 in 2011. The Leipzig Gewandhaus Orchestra, with soprano Christina Landshamer, performed the 4th Symphony under the direction of Riccardo Chailly last year.

The DVD and Blu-Ray discs feature special bonus material including Riccardo Chailly discussing his interpretation of Mahler’s 4th Symphony. Both versions include two tracks featuring the forgotten technology of the “Welte Mignon” piano device, which allowed piano music to be recorded onto a built-in paper roll in the instrument and for that same recording to be played subsequently, without a pianist. In 1905, Gustav Mahler recorded himself performing the finale of his 4th Symphony on a Welte Mignon piano. This recording forms part of the DVD / Blu-ray bonus material.

Accentus Music will be continuing its distinct collaboration with world-renowned Leipzig artist Neo Rauch, who created the evocative artwork for the covers of Mahler’s Symphonies No. 2 and 8. Rauch has painted another one-off piece inspired by his experience of Riccardo Chailly and the Gewandhaus Orchestra rehearsing and performing Gustav Mahler’s Symphony No. 4. The painting, entitled “Hohe Zeit” (“Solemn Time”), forms the DVD and Blu-ray cover.

The DVD and Blu-Ray is now available in the United States, United Kingdom and Germany, and can be purchased from most major stores. It will be released in France on 7th May. 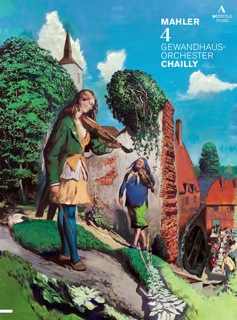