In just a quarter of a century Naxos has created “a catalogue comprising the largest number of individual works and the widest available repertoire of any classical label since the beginning of the recording era.”

A guide to Harrison Birtwistle’s music

Harrison’s elemental and powerful music feels both ancient and modern.

The winner of BBC Young Musician 2012, the final of which was held at the Sage, Gateshead on 13 May and broadcast on Radio 3 and BBC2, is 15-year-old cellist Laura van der Heijden.

There can only be one BBC Young Musician of the year

For every musician whose lifelong public career is launched in the arena of BBC Young Musicians, there are maybe 100 more, at least, who vanish.

Spira mirabilis: The orchestra where everyone’s in charge

Does an orchestra where all players have an equal say mean a recipe for amity or anarchy?

David Robertson, the music director of the St. Louis Symphony, has taken on a position on the other side of the world, becoming artistic director and chief conductor of the Sydney Symphony in Australia starting in 2014.

To marry the heart and the head

Saxon sings out to save Bach ensemble

The theatre in Eisenach, Bach’s birthplace, is under threat of closure. Hundreds gathered to stage a peaceful protest in song.

A classical guitarist’s debut recording remained at the top of the Specialist Classical Chart for much of the past year. That artist is Miloš Karadaglić – or Miloš as he’s known simply – who was named Gramophone’s Young Artist of the Year at our 2011 Awards.

32-year-old Venezuelan Rafael Payare won the Malko Competition for Young Conductors in Copenhagen on Saturday in an atmospheric final round broadcast live on Danish radio and television. 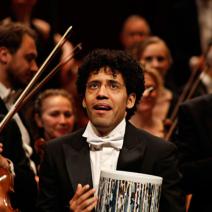