As the Pet Shop Boys announced on their website:

“Our friend and ‘Most Incredible Thing’ collaborator, the German composer Sven Helbig, will be appearing with the Fauré Quartett…at the Apple Store on Regent Street in London in a live performance of ‘Pocket Symphonies’, Sven’s new album of “short – yet symphonically deep songs”. Sven will also be introducing the album which is now available on iTunes. Come early as seating is limited.”

This evening, Sven Helbig and the Fauré Quartet will be performing at the iconic locations of Saatchi & Saatchi at 6pm and the Regent Street Apple Store at 7.30pm for the launch of Sven’s new album ‘Pocket Symphonies’ that is currently 8th in the charts. Also a producer of popular music through his work with the Pet Shop Boys, Rammstein and others, Sven has created twelve symphonic songs, pieces of music short in length and with an orchestral sound, reflecting the many influences of Svenʼs culture, illustrating who he is and what music he listens to. The Pocket Symphonies are intended to evoke memories and emotions for those who hear them.

As music for everyday life, Sven will be reaching new audiences in London to people at work, on their commute and on their portable music players. For ‘at work’ he is bringing a pop-up concert performed by the celebrated Fauré Quartet, to Saatchi & Saatchi and the other companies in their office for their 1200 staff; for ‘on the move’ he has created a number of bespoke oyster card holders which allow for album download and are being handed out around London this week; for ‘portable music players’ he is bringing a concert for the public to Apple London celebrating the album’s release on iTunes.

Remember to tweet at #PocketSymphonies when receiving your Oyster card holder! 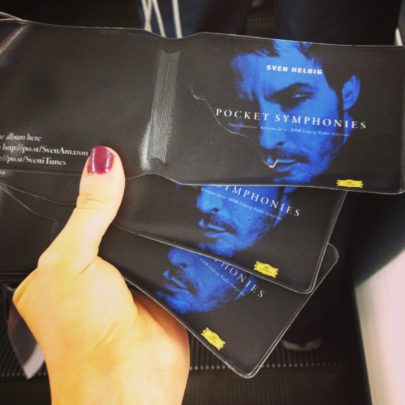