Selected as BBC Music Magazine RISING STAR 2011, Alexandra joined the Young Concert Artists Trust (YCAT) in 2008. She was a resident at the Verbier Festival Academy in Switzerland in 2010 and she was awarded the prestigious CUBS prize. Alexandra is also the winner of Guildhall Wigmore Prize and the Romanian Ambassador for Excellence in Music. This season, Alexandra will collaborate with the Belcea and Elias Quartet, Orchestra of St Paul’s at the Southbank Centre, touring Argentina and the Channel Islands, joining the RPO in Grieg Concerto in Cambridge and Beethoven Emperor Concerto at the Barbican. Alexandra will also be joining Andras Schiff in a week-long residency at Carnegie Hall in New York.

Alexandra Dariescu studied in Iasi, Romania, Pocklington School in York and the RNCM, graduating in 2008 with distinction and the Gold Medal. Alexandra also graduated with distinction for her Masters from the Guildhall School of Music and Drama with Ronan O’Hora and was awarded the GSMD Piano Fellowship for 2010/2011.

Winners of the Ensemble Prize at the 2009 Royal Overseas League Music Competition, the St James Quintet was formed in 2007 from students studying at the Royal Academy of Music for a performance at St James Palace for the awarding of the Queen’s Anniversary Medal.

Since then the quintet has appeared regularly in performances both in the UK and abroad. In 2008, as part of the BBC Proms they gave the UK Premiere of Anders Hillborg’s ‘Six Pieces for Wind Quintet’ which was later broadcast on BBC Radio 3.

They made their Southbank debut in 2009 performing at the Queen Elizabeth Hall before going on to appear in recitals at the Norfolk and Norwich Festival and live on BBC Radio 3’s ‘In Tune’. They have performed at the Purcell Room several times, most recently as Park Lane Group Artists. They made their Wigmore Hall debut in November 2010. The quintet has performed for HM The Queen, The Duke of Edinburgh, Princess Alexandra, HRH The Princess Royal, Archbishop Desmond Tutu, Sir Charles Mackerras and Sir Harrison Birtwhistle. 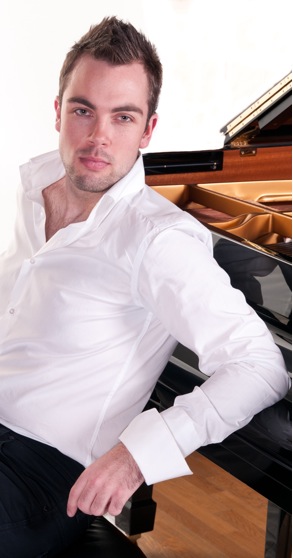 Born without his right hand, Nicholas is one of a few left-handed pianists worldwide and at present is also the youngest. At 17, Nicholas was awarded a place at the Junior Department of the Guildhall School of Music in London where he studied with acclaimed concert pianist Lucy Parham. After two years of studying at the Guildhall School of Music, Nicholas was awarded the Annual Piano Prize just before he left the school in 2008.

During this time he played numerous recitals throughout the U.K, at venues including St James`s Piccadilly, Fairfield Halls, The Lansdowne Club, Bluthner Piano Centre and Christ Church Cathedral, Oxford. Nicholas has been a regular participant at the Chetham’s International Festival and Summer School in Manchester. His time spent at the festival has seen Nicholas take part in master classes with concert pianists such as Peter Donohoe, Martino Tirimo, Philippe Cassard and Margaret Fingerhut. All of whom expressed high acclaim for Nicholas’ playing.

Being described as ‘Truly inspiring: The music prodigy who won’t let anything get in the way of his dream’ by the Daily Mail, Nicholas has been a student at the Royal College of Music in London since September 2008, where he studies with Nigel Clayton. Nicholas has appeared on ITV’s “This Morning” show where he gave a live performance of Blumenfeld’s Étude in A Flat Major Op.36. Soon after his “This Morning” appearance Nicholas was featured on ITV’s “London Tonight” show and GMTV.

Nicholas’ upcoming engagements include performing at a CODA piano recital in Tunbridge Wells as well as in Dublin over the summer.

As well as gaining the Junior Guildhall Annual Piano Prize, he has been awarded an MBF Instrument Scholarship and most recently Nicholas was awarded the prestigious AMI award for creative excellence in music, presented to him at The London Studios in late 2010.

“Truly inspiring: The music prodigy that won’t let anything get in the way of his dream” Daily Mail

Alex Leese is a versatile flautist who has an extensive repertoire ranging from Bach to Birtwistle.  He started playing the flute at a young age and spent a number of years at the Junior Department of Trinity College of Music, where he was awarded the Cassal Woodwind Prize.  He spent a year studying at Senior Trinity College of Music with Wissam Boustany before beginning his music degree as an instrumental and academic scholar at New College, University of Oxford.  Alex is presently in his third year studying music at the University of Oxford where he is the principal flute of the Oxford Univeristy Orchestra and Sinfonietta working with conductors such as Peter Stark and Daniel Harding.  Having studied with Patrick Gallois at the Academia Musicale Chigiana in Siena, Alex has now accepted a place to study at the Royal College of Music for a two-year postgraduate course and has also just been awarded a place on the prestigious LSO Woodwind Academy 2011.

Alex has performed in the Cadogan Hall, the Purcell Room, and St John’s Smith Square and has performed concertos throughout Europe. In 2007 Alex won the Wisley Youth Music’s Competition to appear as the soloist in Mozart’s Flute Concerto in G, with the National Symphony Orchestra as a support act to Katherine Jenkins. Recent projects include recitals in the Jacqueline du Pré concert hall, Queen’s College, Oxford, a Naxos recording of Hovhaness’s Symphony No. 23 and a recording for Christ Church Cathedral Choir.

‘The principal flute, Alex Leese, stole the instrumental crown with perfect solos throughout the course of this lengthy opera.’ Opera Magazine, September 2009