Yesterday, WildKats Kathleen and Fleur were lucky enough to attend the second London performance of the Teresa Carreno Youth Orchestra at the Royal Festival Hall, as part of the Shell Classical International series.

It is easy to see why the RFH audience erupted in a standing ovation and we left the concert entirely elevated….

The sheer size of the orchestra alone takes your breath away:

We counted 11 double basses (4 of which were female), 8 horns, 6 flutes and 100s of strings. That’s even before they began playing. From the first note that was played of last night’s concert to the final encore, it was evident that there was a relentless energy and passion distilled in the players.

So what makes the orchestras of El Sistema and particularly this youth orchestra, create so much energy and expression between them to leave their audiences stunned and buzzing?

Having worked on the El Sistema project whilst living in Venezuela back in 2004, I feel a close connection to the players, conductors and staff venturing over the pond for these European tours. Venezuela is a beautiful country with impressive landscapes and warm hearted people but there is a huge depression in the  country. Education is poor, politics are in constant flux, crime and discrimation are huge issues, especially in the capital, and  music or arts in general were not typically integrated in the society. Females particularly struggle to study, live independently and have a career. In fact, most females venture to Europe or the States in seek for a better education and career opportunity for themselves.

El Sistema is a life line in Venezuela. It is the amalgamation of a tireless youth campaign by Abreu and his backers but also a volunteer movement where the young get involved because they can, not because they are forced to. It feels as if El Sistema is the football club everyone wants to be part of. They help each other, they socialize after the rehearsals and concerts, and they share hopes and dreams. The orchestras very rarely offer the opportunity of a huge career in European orchestras or are tempted with huge salaries, very few do the leap to a big professional and international career, but you get the feeling that it isn’t about that.

Obviously, there are the golden success stories and Gustavo is undoubtidly on the forefront of that. But even he insists on spending at least 2 months in Caracas every year. Even on tour he will spare every minute with the orchestra.

Their bond is so strong. This was made particularly clear when at the end of last night’s performance, the members of the orchestra hugged their desk partners, danced around, ‘high fived’ each other and many burst into tears over the end of their joint tour. Shortly afterwards everyone met up for the Salsa afterparty in Southbank’s foyer which, for me, is also a typical end of a concert in Venezuela. We always left the halls together and ventured to a salsa, meringue party somewhere…. 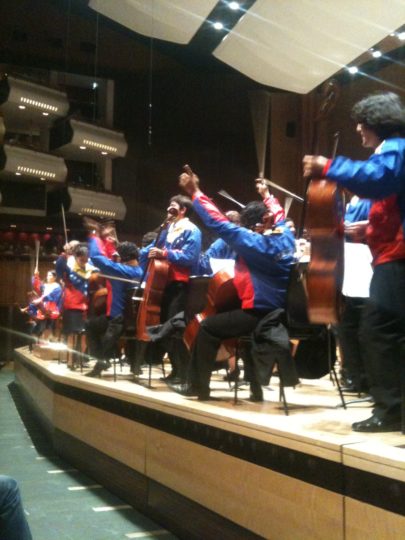 So why is it that orchestras in Europe don’t show the same amount of compassion and inspiration?

First of all, I dont think it is necessary. It is not as if we are poor in cultural offerings in the UK… There are enough cultural and social projects, groups and environments for youth to engage. I also dont think trying to recreate the model in a 1:1 replica is going to work as the foundations are so vastly different.

I wonder if we are reaching for the wrong direction? Maybe the UK’s youth is not unified by orchestral music? There was a recent survey in the UK with results showing that more children sing than play football. Is our answer the fantastic choral structure we have in place?  Should we build a Sistema based on choirs? The question can also be asked whether it is classical music, or even music in general, that is the aspect missing within the UK youth.

My favourite picture of last night was a little boy who had meet one of the cellist at a school visit of the orchestra, the boy was only 8 or 9 and was so excited to be seeing the orchestra play, he held a little letter throughout the concert in his hands in the first row waiting for his moment to approach his chosen favourite cellist similar in age. He asked him to become his pen friend and somehow I found this so touching and inspiring. 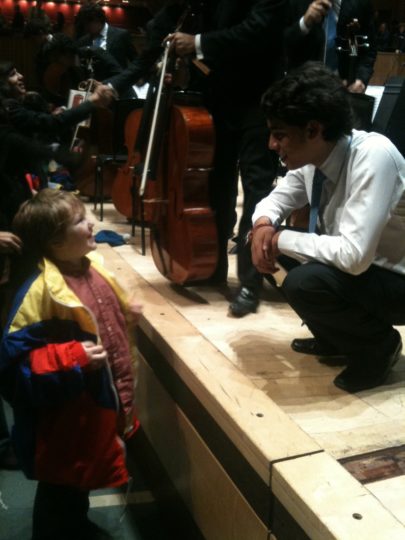 Fleur was even lucky enough to get thrown her own jacket. Viva Venezuela! 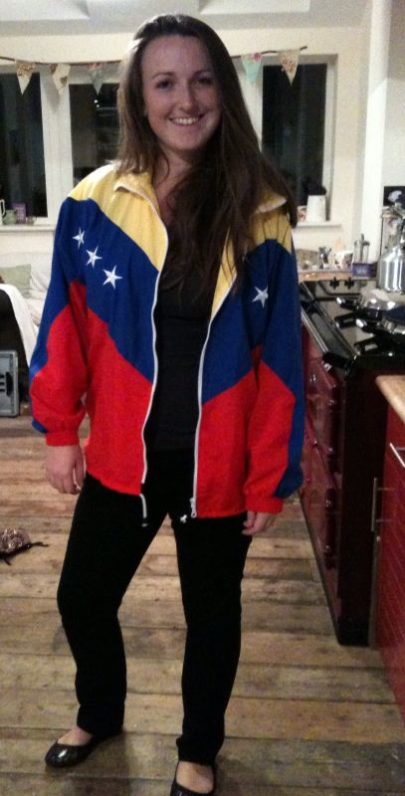