Described by Lazar Berman as “a serious artist and master, whose emergence in today’s atmosphere of pseudo-artistic and shallow music-making is especially valuable and welcome”, Rustem Hayroudinoff has performed to great critical acclaim in Japan, USA, Canada, his native Russia and Europe. More recently, he has made a recital debut in New York, performed Beethoven’s Emperor Concerto with the Czech Philharmonic under the baton of Marin Alsop, toured the UK with the Czech National Symphony Orchestra performing the Rachmaninoff 3rd Concerto and collaborated with the Soloists of the London Philharmonic Orchestra in a chamber music series in London and Munich.

Some of the orchestras he has performed with are the Osaka Century Orchestra, Tokyo Symphony, BBC Philharmonic, Bournemouth Symphony and London Philharmonic. His performances have been broadcast on most major classical radio stations around the world, and he has appeared in the documentary “The Unknown Shostakovich” alongside Vladimir Ashkenazy, Valery Gergiev and Maxim Shostakovich.

Hayroudinoff has recorded for NAMI Records (Japan), Decca and Chandos. His recordings of Shostakovich’s Theatre Music and the Dvorak Piano Concerto with the BBC Philharmonic were selected amongst the Best CDs of the Year by BBC Music and Gramophone magazines. His CD of the Rachmaninoff Complete Preludes was selected by Classic FM Magazine as part of the ‘four discs essential Rachmaninoff collection’, alongside the recordings of Arthur Rubinstein and Andre Previn. His recording of the Complete Études-Tableaux by Rachmaninoff became the Instrumental Choice of the Month with the BBC Music Magazine and was nominated for the Best Instrumental CD of the Year Award. It was also selected as the finest version of these pieces on BBC Radio 3’s Building a Library.
Rustem Hayroudinoff studied with Lev Naumov at the Moscow Conservatory and with Christopher Elton at the Royal Academy of Music, where he is now a Professor of piano. For more information, please visit www.hayroudinoff.com.

On Saturday 13th April, Rustem is performing at St Johns Smith Square, with a programme to include both CPE and JS Bach, Liszt and Rachmaninoff. For more information click here 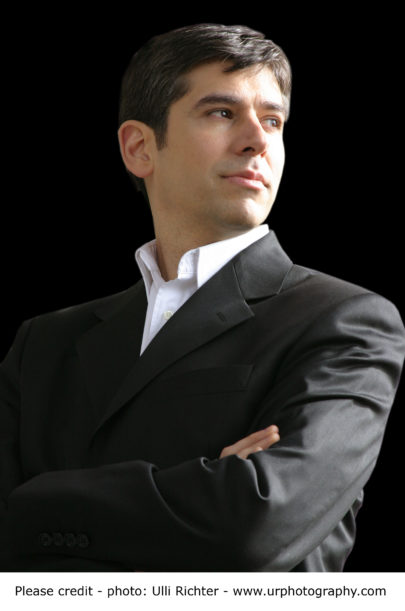