The London-based Turkish pianist AyseDeniz Gokcin released an EP album towards the end of 2012, uniting her love for rock and classical music. The young pianist transformed three Pink Floyd songs in the style of Franz Liszt and performed her arrangements on a classical piano – no electronics involved.

She wanted to pay homage to Liszt and celebrate his 200th anniversary as well as Pink Floyd’s music-making – ‘Another Brick in the Wall’, ‘Wish You Were Here’ and ‘Hey You’ all feature on her EP.

Following an article on her release on Prog Rock Magazine Online, which can be read here, AyseDeniz has received worldwide recognition. First published on 26th December 2012, the piece has been shared on Facebook nearly 300 times and tweeted directly from Prog Rock Magazine Online by many a reader. The feature has continued to spread; first translated into Hungarian for Hard Rock, followed by a translation into Spanish for Esquiz Ofrenia. AyseDeniz’ article was then shared on major music websites in Finland, Brazil, Italy, Greece, the Netherlands, Turkey and many more. And so her Lisztified interpretation of Pink Floyd has gained fans worldwide.

AyseDeniz will be performing at St James’, Piccadilly on 25th April. 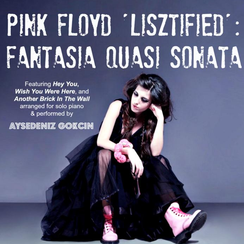