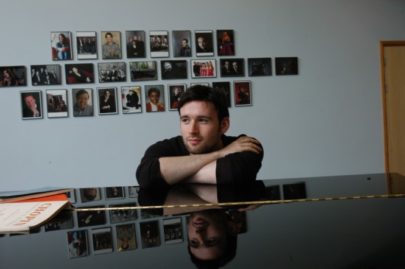 In the run-up to our Young Artists Autumn Showcase on 13th September at the Forge Arts Venue, we spoke to pianist John Paul Ekins on life, the world and everything.

Did you have any other career plans besides studying at the Royal College of Music?

Yes, I was at a very academic school, and before I got the itch to take the piano seriously (at as late an age as 15) I was lined up to study Economics at Cambridge! Even after I did decide that the piano was the way forward, the school was still very keen on the academic side, and I had a deferred place to read music at Cambridge, which I gave up to go to the RCM. This definitely turned out to be the right decision for me, looking back.

Do you have any famous relatives (alive or dead)?

Well my ancestors were from Devon and Yorkshire and East Anglia , so you could say I have a pretty good mix of west country, non-conformist and viking. The interesting thing is that most of them were shoemakers, joiners  and cartwrights, or else farm labourers- pretty good things to be really, as we all need shoes, food and furniture. And since village carpenters usually made coffins as well, you could say they were all useful members of the community! So, no, none of us were pirates, convicts or bigamists, although there was a doctor who was also a composer. But maybe I should also mention my mother’s grandfather, who started off as a warder in Dartmoor Prison in the 1890s, and finished up by being Chief Clerk and Schoolmaster. Pretty law-abiding, really, apart from the non-conformism.

What do you know now that you wish you’d known when you were 16?

Wow! I suppose some sense of the wider perspectives in life, a better understanding of my values and priorities (as they have become now) would have greatly reduced feelings of anxiety and stress about my artistic (and human) development. But maybe that would apply to pretty much any teenager!

Is there any particular concert work which you would like to perform?

Both the Brahms concertos have always been iconic works in my mind. I shall be learning the first later this season, leaving the even more titanic second to enjoy in years to come!

What do you do to prepare for a performance?

Nothing too unusual I guess. A hearty meal a few hours before, and lots of relaxation techniques designed to free my mind from stress and paranoia, and liberate both my physical movements and creative thoughts.

Have you ever suffered from finger or hand cramps during a live performance? If so, how do you get past that?

Never so far (knocking on wood!).

Who was a better pianist – Liberace or Mozart?

Well impossible to tell of course, though undoubtedly two men with a huge amount in common, and a desire to entertain above all else. Now that’s a meeting of minds I’d pay good money to see…

Do you have any hidden talents?

When I was 12  I took part in a couple of BBC plays. I think Swallows and Amazons has been repeated about 12 times. Listen out for it on Radio 4Extra. It was repeated two weeks ago, so it must be due to come round again in October.

Is anyone else in your family musical?

Both my parents were professional singers – indeed, this is how they met, all loved up in Gilbert & Sullivan! I certainly inherited something of a voice from them, though since my voice broke it tends to be noted more for its volume and strength rather that it’s timbre or tunefulness!

What would you say is your preferred genre of music to perform?

Hard to generalise a whole genre. Probably feel most comfortable with Romantic composers, though have recently developed a newfound love of Schubert and Mozart, the first as his wonderful music ties in with such an extraordinary life, and the second as the contradiction of his mentality vs. the spiritual beauty of his music is totally mind-blowing!

Who or what inspires you?

I have to say that I’m inspired by my love of music. This is the only motivation I need to practice, and as I’ve found many times, to be motivated by other goals (success, money, pressures from others) has all too often led to unfulfillment.

What do you think about when you are performing?

As little concrete as possible! For me it’s so important to lose oneself in the sub-conscious. All the hard work has been done in the practice room, so now we as performers are just trying to create as spontaneously as possible, and I’ve always find that the more one consciously tries to do this, the more and more difficult it becomes.

Where do you see your career heading in the next five years?

Hopefully continuing its current trajectory I suppose. I’m already very busy with solo and chamber concerts, but now of course it’s all about giving those concerts at higher and higher levels, and in many ways this is the hardest transition to accomplish, so fingers crossed! Just started taking on a couple of different types of work too; giving my first masterclass in November, and in December for the first time I’ll be giving recitals on a cruise ship for a few weeks which, as one can imagine, involves some wonderful travelling! This one’s to the Carribean, in December. Quality!

What are your hobbies and interests?

I adore the other performance arts, so love the cinema, the theatre, the ballet, and stand-up comedy! Huge fan of Ricky Gervais, Steven Merchant, and the inimitable Karl Pilkington! Really into sports too, mainly football, tennis, cricket and F1. Trying to swot up on athletics at the moment to be ready for Olympic Fever! Other passion would have to be animals, with a pretty indiscriminatory fascination. Wildlife documentaries have me spellbound – I think the natural world is just incredible.

Tell us something unusual about you.

I cycle everywhere I can, as am not keen on cars, walking, or the vast majority of London transport! I have often turned up to concerto dates on the bike in my tails…